Buying Before Selling: John and Linda’s Search for a New Home

John and Linda owned a TIC in the Mission District of San Francisco for several years. Their home was in a thriving district of the city but with two small children, they needed more space. They decided to look in the East Bay and ended up finding a single-family home that was perfect for their family. The only problem was they couldn’t afford to buy a new home before they sold the one they had. They needed the equity in their current home for their down payment and their income wasn’t sufficient to support two mortgages.

In a normal real estate market, it’s possible for buyers to write an offer on a new property that’s contingent upon the sale of their current one. But, the Bay Area real estate market is anything but “normal”. In fact it’s extremely competitive and contingent offers are often not accepted (or even considered) by sellers. Sellers have plenty of buyers to choose from so there’s no need to accept an offer that depends upon the sale of another property.

Although John and Linda could’ve sold their TIC before buying, they didn’t want to. Their TIC would so quickly but it would potentially take months for them to find a new home given how competitive the market was. They could have rented in the meantime but finding temporary rental housing was almost as hard as finding a new home to buy. They didn’t want to find themselves homeless with two small children.

Linda’s father stepped in to provide help. He provided gift funds for their down payment and also offered to co-sign on their new loan so they could qualify. This should have been the perfect solution but another issue came up. Tax bills on TIC’s in San Francisco are not divided. The city issues one bill for the whole building and the owners then pay their pro rata share.

John and Linda’s building had six units with a very large shared tax obligation. Lenders view tax bills as joint and several obligations. In other words, while they realize that each owner may only be responsible for a portion of the bill, their overriding concern is that if one owner doesn’t pay his or her portion of the bill, the others are still responsible. For this reason, most lenders would take the full amount of the tax bill and include it in John and Linda’s debts. They couldn’t qualify with the full amount of the tax bill included – even with Linda’s father co-signing.

To accommodate their purchase I found a lender that was willing to include only John and Linda’s share of the TIC tax bill in their debts. This allowed them to move forward with their purchase. As soon as they were in contract to buy their new home, they listed their TIC for sale. It sold quickly, which allowed them to return the gift funds to Linda’s father and comfortably pay the mortgage on their new home. 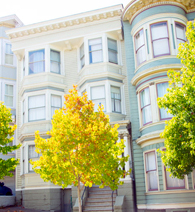